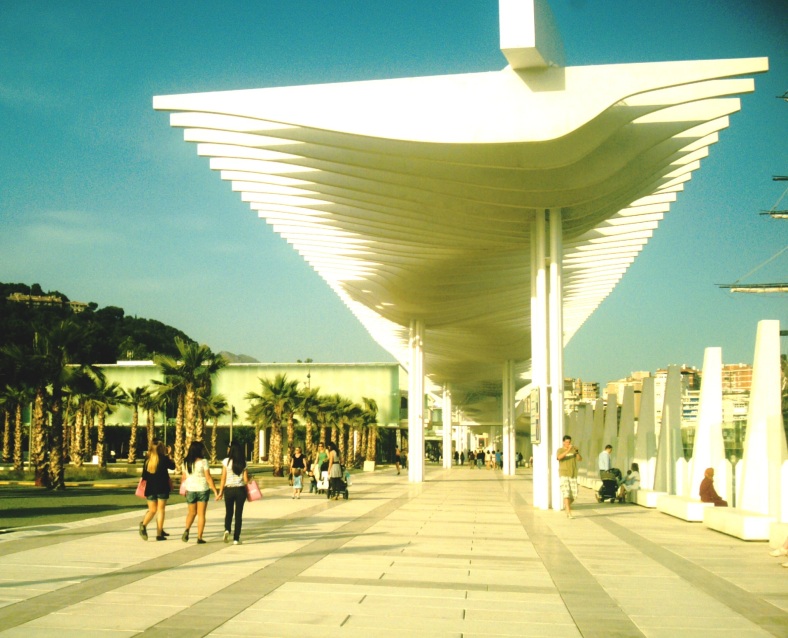 Running almost hand in hand with the redevelopment of the Parque over the past few years has been an initiative to create a brand new public space in the city’s previously derelict harbour area, immediately to the south, just across the Paseo de los Curas main road.

A separate project in itself, but all part of one grand (and continuing) plan by the authorities and designers to reinvigorate the city centre, and to re brand Malaga as a thriving destination of choice throughout Europe and worldwide. Writing in 2016, it’s a plan that’s clearly turned out to be a stunning success.

This work has been undertaken in two phases. The first stage involved the renovation of Muelle No. 2 running immediately alongside the Parque. On my first visit to Malaga in 2004 this was just an empty, concrete landing area. By  February 2010 it had evolved into a busy building site, with the first palm trees already placed in situ to give them time to establish. 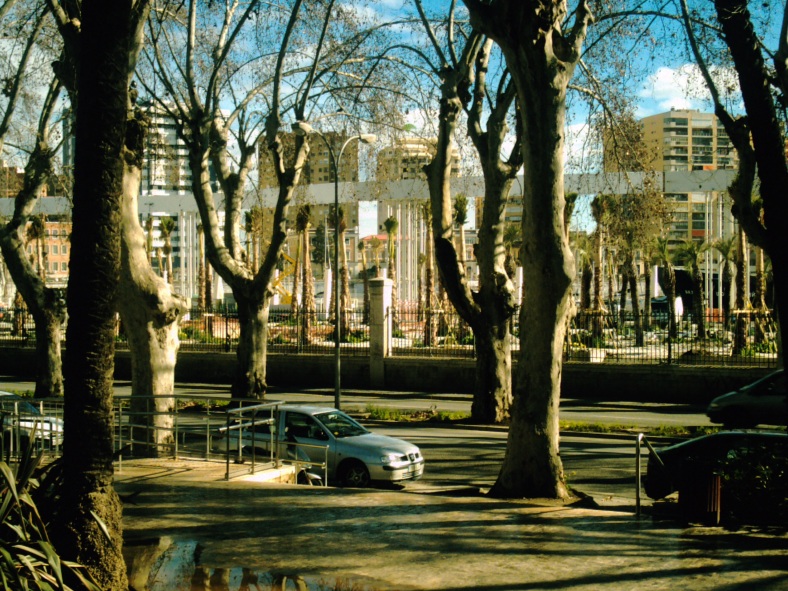 It was lovely to come back here and see the finished project, officially opened in March 2011, and it is worth noting that it was this area which was initially given the name “El Palmeral de Las Sorpresas.” 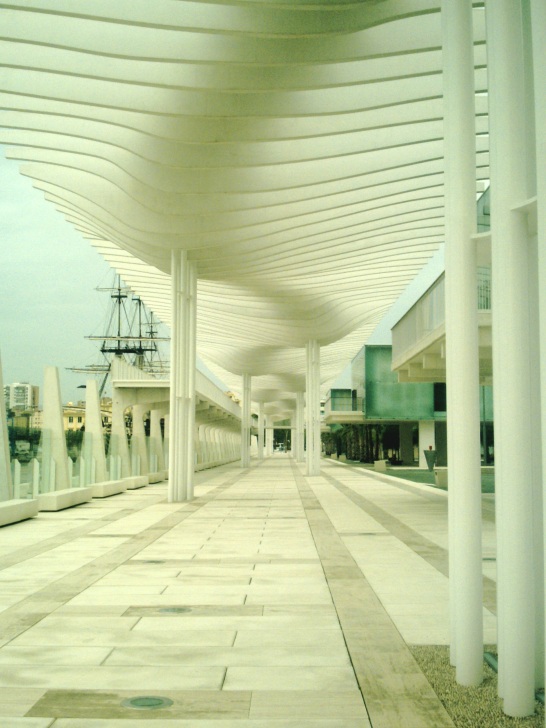 Designed by architect Jeronimo Junquera and partners, the “Muelle” perhaps had a prime purpose  of  acting as a rather stylish waiting area for passengers of visiting ferries and cruise ships, but in reality it has evolved as an extremely popular leisure zone for Malaga, its citizens and its tourists. The project was also be seen as another part of the attempt to open up pedestrian access across the city, and has certainly achieved it’s aim of transforming the orientation of public space throughout the urban centre and attracting people southwards towards a new, rejuvenated harbour area.

In spite of the busy road scheme which unfortunately dissects the whole area (more of which in the “public park” section of this blog) planners have nevertheless achieved – as best as they possibly could, it seems – their ideal objective of the creation of a series of interlinked but contrasting green areas throughout the city centre, flowing down from the newly landscaped hillside zone below the castle and Los Jardines de la Puerta Oscura, continuing on through Los Jardines de Pedro Luis Alonso, via the Parque de Malaga itself and on to the Palmera de las Sorpresas.

It’s worth noting that the efforts to transform Malaga city centre have not ended here ! Anyone visiting in 2018-19 cannot fail to notice the major and rather messy works taking place to the west of the Parque on the famous tree lined Alameda avenue, which will shortly be converted into a largely pedestrianised zone (once the Metro system is completed) again adding to the ambience of the city centre and encouraging access throughout.

I have also read about significant plans to improve the largely neglected pathways running through the green slopes around the city’s hilltop Castle. And, writing in 2019, look out for the campaign to hopefully provide the city with it’s very own Urban Forest (“Bosque Urbano Malaga” (B.U.M.) ) on the former Repsol Industrial site. Admittedly this is away from the city centre to the west, but if this achieved then it will be another part of of Malaga’s exciting evolution. 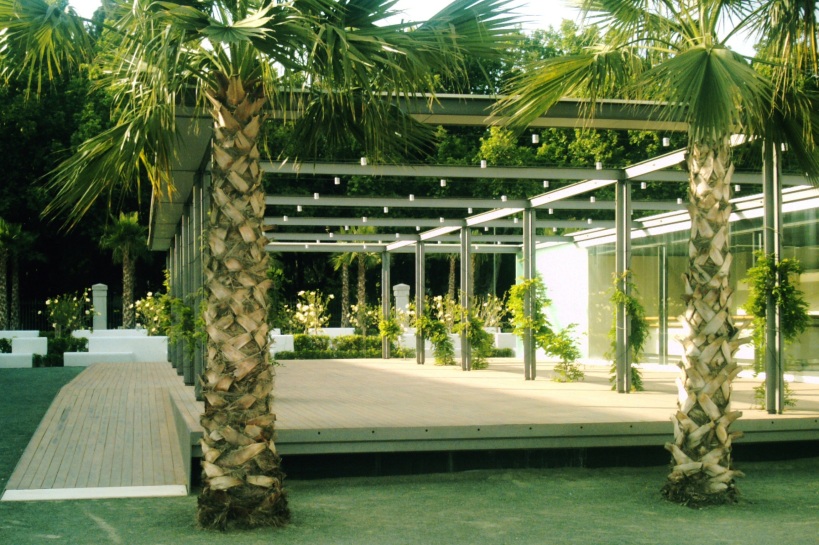 Bar area with decking, palms and young Wisteria plantings at the base of a modern steel frame arbour.

Back on topic, however, here are some finer details about the Palmera de las Sorpresas.

With its budget of 32m euros, the project covers an area of some 26,700 sq.metres. It contains 420 palm trees (planted the previous summer to help their establishment) alongside 400 other small trees, including Olives, Tamarisk, Mulberry, Acacia, Carob, Citrus, and Parkinsonia, with a total of 7,400 individual shrubs, climbers, herbaceous and bedding plants (Lavenders, Hibiscus, Wisteria, Honeysuckle, Viburnum tinus, Alyssum maritimum, etc. ) and 640 sq. m. of turf. There is an extensive use of block planting (such as Festuca glauca) and delineated, geometric areas with seating, white paving and blue-grey gravel. To be honest, the reflective white paving can be quite hard on the eyes in the bright Malaga sun !

There are sculptures, play areas, and five separate buildings designated for functional, cultural and social purposes, which in 2014 are now established museums, art galleries, bars and restaurants. The whole site is dominated by an impressive, twisted pergola which is designed to catch the rays of the sun through the day, and provide a pleasant shaded walkway along the length of the harbour.

Since my visit in May 2011 work on the area has continued. The adjacent, vacant concrete landing site to the east has recently been unveiled as Muelle Uno (harbour number one) and, rather confusingly, the title of “Muelle Uno” seems to now be applied to the whole area. I was able to see this for the first time after my visit in May 2013.

It’s clear that the development has enabled much improved access and movement for pedestrians around the harbourside zone, with ramps and steps at intervals, and entrance and exits at both ends of the Paseo de las Curas, along with an underground car park. Furthermore, new underpasses and paved areas successfully link the Muelle to the adjoining, sweeping “Paseo Maritimo Pablo Picasso” zone beyond the bullring, another important artery of the city which opens up a whole new fascinating and scenically beautiful area for the tourist to discover, heading towards the less touristy but up and coming barrios and beaches of Pedregalejo and El Palo, in Malaga Este (well worth a visit).

The redevelopment has also seen the introduction of a reliable bus service on to a roadway through the Muelle, and towards a headland where an impressive new cruiseship terminal is situated. In 2015, visits by such ships are a regular feature of Malaga life, and their height and size offer another spectacular dimension to the harbourside scenery of the city.

The original Muelle No.2 perhaps offers the visitor more in terms of horticultural and contemporary garden design interest, with its associated museums, play areas and bars. The new Muelle Uno is characterised more by its restaurants and retail outlets, but put together, the whole zone “works.”

Having said this, a return visit in December 2013 reveals new plantings and play areas in the upper section of the original Muelle Uno which help to soften the whole area (see photos below). Yachts are moored alongside, boat trips are available for tourists, and the shopping area even has its own private security guards. Maybe the atmosphere strays a little from the original founding principles of the Parque de Malaga in being “proximo, abierto, y publico”, with it’s emphasis on botanical splendour, but the Muelle areas together do provide a wonderful complement and contrast to the other green zones nearby. A modern continuation on a theme, perhaps ?

It was encouraging to see that the harbour does provide the space for vibrant open air music, local entrepreneurs and crafts stalls, some of them very inventive, around the time of Christmas and New Year festivities, which proves immensely popular for tourists and citizens alike. If you are in the area around that time, it is well worth a visit. More information and updates can be found through the website at www.muelleuno.com.

What is most noteworthy about this whole zone, however, is not just the sweeping architectural designs, the white marble, the steel, the glass, the concrete or the plantings. It is the way that local Malageueños and tourists alike have really taken the area to heart as a place to meet, socialise, eat, drink, spend time with each other or just go for a walk (Dar un Paseo). In this sense it really does continue the Spanish cultural and social tradition of the Paseo Maritimo as the place to be, and to be seen. 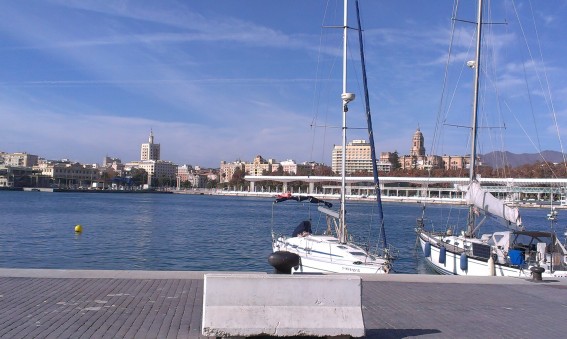 The view across to Muelle No.2 and Malaga city centre from Muelle Uno.

A band playing for the Sunday crowds, Christmas 2013. 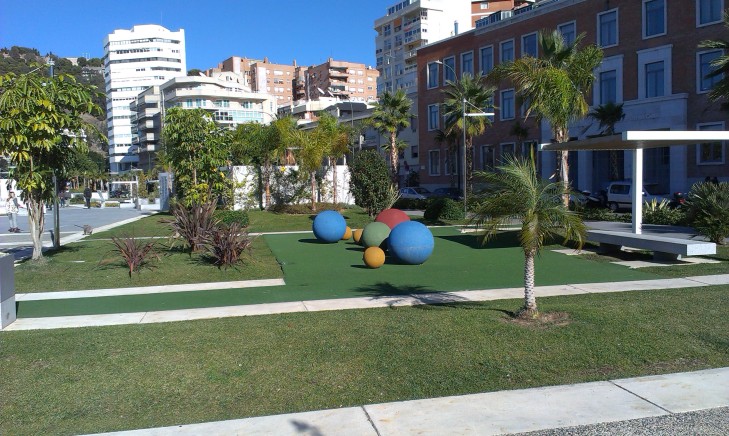 Newly planted zones and play areas in the upper section of the Muelle soften the steel and paved landscaping.

A quick note on the Malaga tourist boom….

Over the past few years the city of Malaga has established itself as a popular “city break” destination to genuinely rival the likes of Barcelona, Madrid or Seville. Ease of access, its sheltered, sunnier location, the opening of new museums, restaurants and pedestrianised shopping areas, along with more affordable prices, all offer the tourist something different.

Malaga airport is expanding, and whilst a decade or more ago most tourists headed for the beach resorts of the Costa del Sol and beyond (of course many still do) certainly increasing numbers are deciding to stay in the city itself rather than bypassing it for the well known resorts of Marbella, Torremolinos or Nerja amongst others.

It is also worth noting the role of the cruiseship industry as part of the tourist growth in Malaga. The latest figure I have seen is one of some 600,000 cruiseship visitors to the city in the past year, with estimates that this number will rise to 1 million in the near future.

Writing in 2013, the city’s tourist board has once again revitalised its advertising campaign for the area, with new brochures and a You Tube video. Updating this article in 2015 and 2016, it is clear that this campaign continues onwards and many tourist websites are now recommending Malaga as one of the “places to visit.” Read more about this in the Malaga Tourism, Books and Websites part of this blog where I hope to add links of interest. 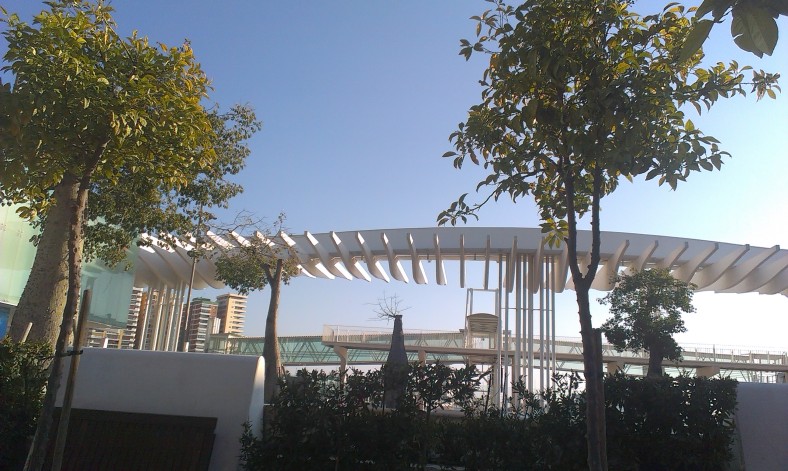 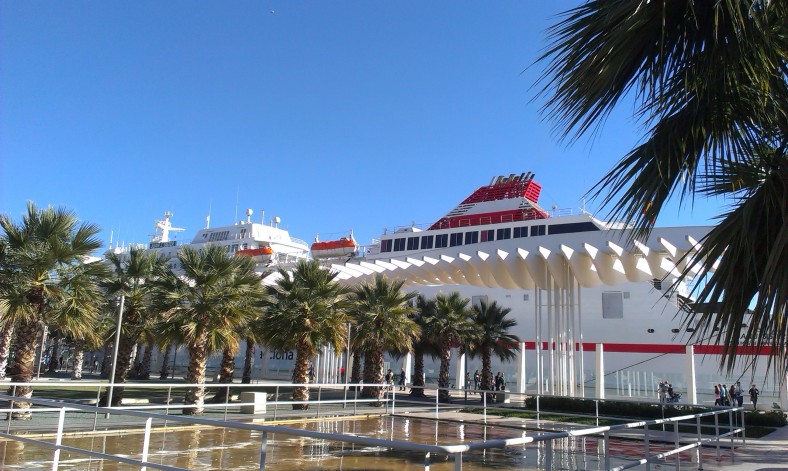 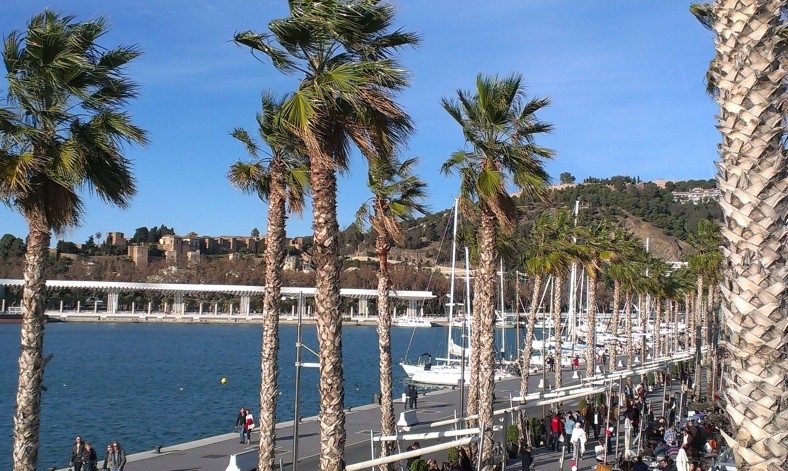 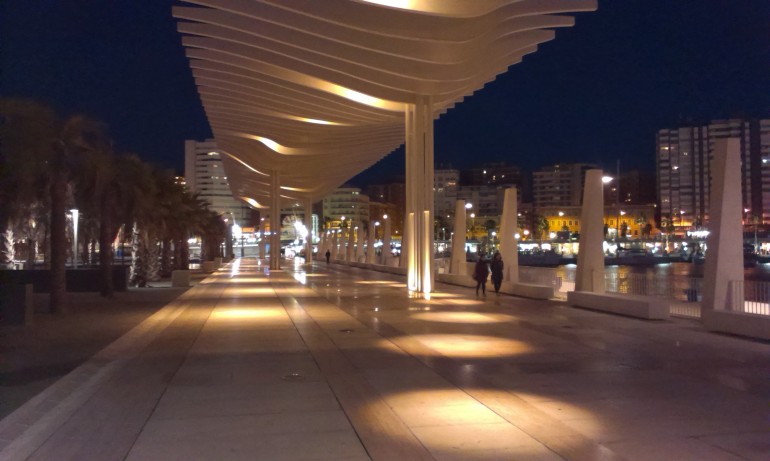 Established young trees in Muelle No.2 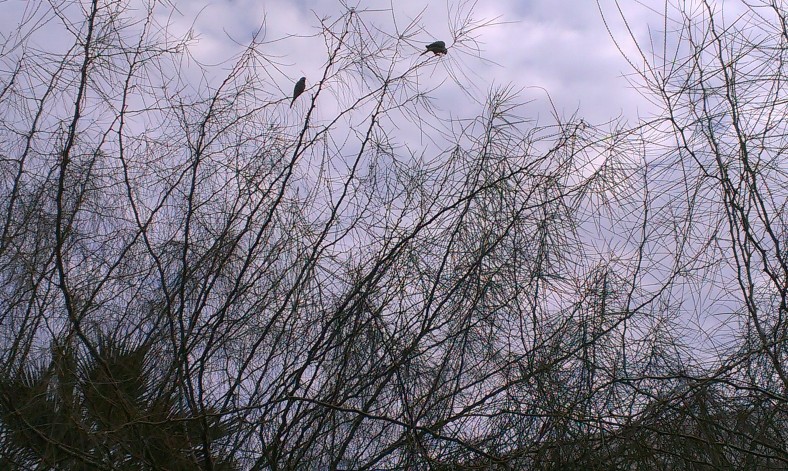 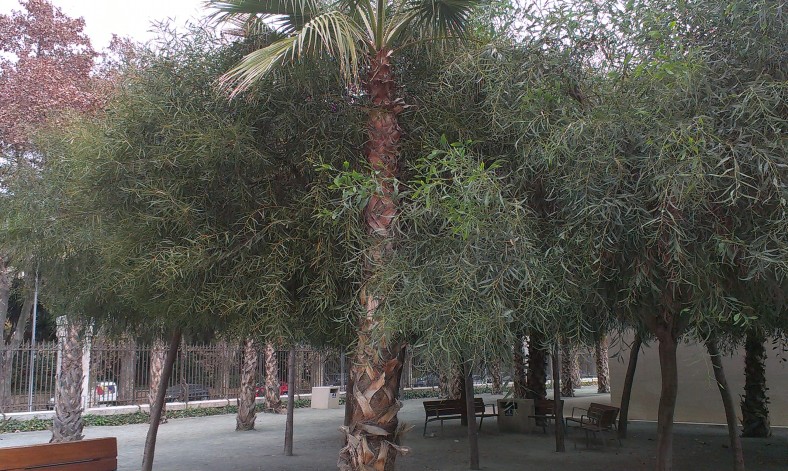